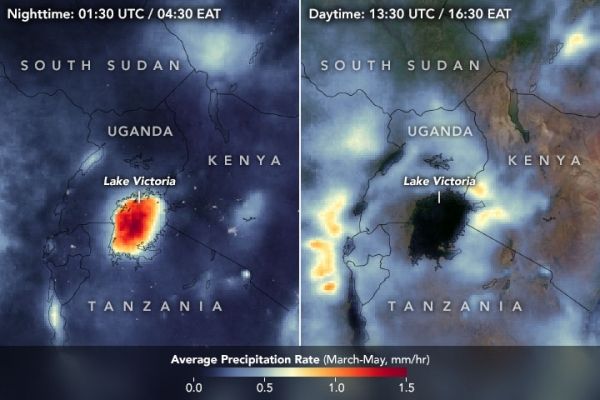 The lake in eastern Africa is known for its intense nighttime thunderstorms, which are influenced by the lake's location, size, and nearby topography.

Lake Victoria is the largest lake in Africa and an economic and food security lifeline for roughly 30 million people living near its shores in Uganda, Kenya, and Tanzania. But it also takes lives. Cyclical, daily weather patterns around the lake create violent nighttime thunderstorms that kill roughly 3,000 to 5,000 fishermen per year.

“This is definitely one of the stormiest places on Earth,” said Wim Thiery, a climate scientist at the Vrije Universiteit Brussel who has studied Lake Victoria for several years. “Almost every night, you see these intense thunderstorms and sometimes even water tornadoes developing over the lake because it’s a really favorable environment for storms.”

The animation above shows rainfall patterns around Lake Victoria across a typical 24-hour period during the wet season (March, April, and May). It represents the precipitation rate as calculated every half hour and averaged across 18 years (2000-2018). The data come from the newest Integrated Multi-satellitE Retrievals for GPM (IMERG) algorithm, which was released in late 2019 and provides one of the longest continuous records of high-resolution precipitation data. The IMERG product combines data from the Tropical Rainfall Measuring Mission (TRMM) satellite, which operated from 1997 to 2015, and Global Precipitation Measurement (GPM) satellite. which has been collecting data since 2014. Both missions were joint efforts between the Japanese Aerospace Exploration Agency (JAXA) and NASA.