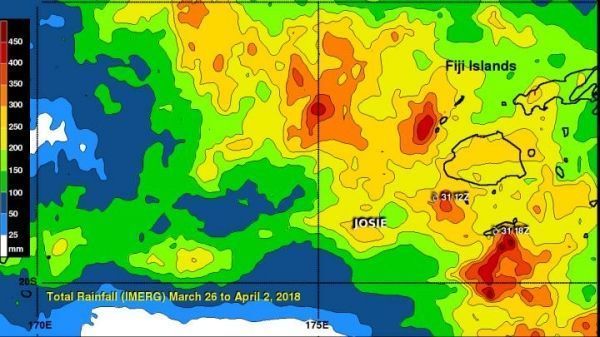 No casualties were reported with Keni even though it was a more powerful tropical cyclone than Josie. Keni was still intensifying when it passed directly over the island of Kadavu located just south of Viti Levu. Flash flooding was reported on Viti Levu and Kadavu. Maximum sustained winds of greater than 70 knots (81 mph) were responsible for widespread damage caused by the direct hit to Kadavu. Keni's peak winds of 85 knots (98 mph) occurred after the tropical cyclone passed to the southeast of Kadavu.

Image: This rainfall analysis covers March 26 to April 2, 2018. During this period tropical cyclone Josie formed and passed by close to the southwest of Fiji and then to the southeast. IMERG data indicated that rainfall totals of greater than 250 mm (9.8 inches) occurred over large parts of Fiji and extreme rainfall totals greater than 450 mm (17.7 inches) in some areas along the storm's track. (Credit: NASA/JAXA, Hal Pierce)