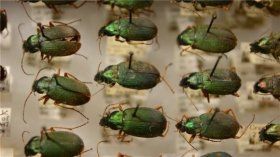 Some of B.C.’s beetles are shrinking as their habitats get warmer, according to new UBC research. The study provides evidence that climate change is affecting the size of organisms.

“In nature, there is so much going on that can affect body size so we weren’t sure we were going to see anything,” said Michelle Tseng, assistant professor of botany and zoology at UBC who oversaw the research. “This research provides evidence that climate change is affecting even the smallest organisms out there.”

Scientists expect living organisms to respond to climate change in three ways – by moving to new regions, changing the timing of their life stages or shrinking. To date, most of the evidence for organisms shrinking has come from laboratory work where the environment and living conditions can be tightly controlled. Tseng asked students in her fourth-year class to look into whether this is happening by examining beetle specimens in UBC’s Beaty Biodiversity Museum collection, as well as historical weather data.

Assisted by curators at the Beaty, students selected eight species of beetles from the Lower Mainland and Okanagan for their data set. They photographed more than 6,500 beetles and inputted information about each insect, when it was collected and where it was found into a database.

Read more at University of Faculty of Science British Columbia