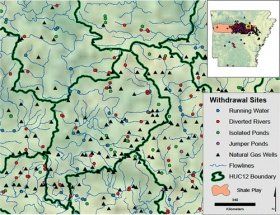 Concerns over hydraulic fracturing, an oil and gas extraction method that injects millions of gallons of freshwater and chemicals into shale, have largely focused on potential impacts on water quality. But, as scientists report in ACS’ journal Environmental Science & Technology, “fracking” operations could have impacts on water quantity because they are withdrawing these large amounts of water from nearby streams, which house aquatic ecosystems and are used by people for drinking and recreation.

On average, more than 5 million gallons of freshwater is used to fracture one gas well in the U.S. That’s more than enough to fill seven Olympic-size swimming pools. Small streams are a major source of water for these operations. Some of these streams also provide drinking water for communities and homes for species with already declining populations. However, little is known about the amount of water that can be sustainably withdrawn from these sources. Sally Entrekin and colleagues wanted to flesh out this picture for the Fayetteville Shale play, an active gas field in Arkansas where more than 5,000 gas wells were drilled using fracking techniques between 2004 and 2014.

The researchers estimated the water stress that hydraulic fracturing might place on streams in the gas field based on water usage and timing for fracturing wells and data on nearby stream flow rates.