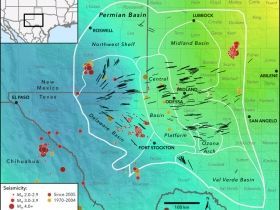 A seismic stress map created by Stanford geophysicists can help predict which parts of West Texas and New Mexico may be at risk of fracking-induced earthquakes. The map could guide oil discovery efforts in the region.

Stanford geophysicists have developed a detailed map of the stresses that act in the Earth throughout the Permian Basin in West Texas and southeastern New Mexico, highlighting areas of the oil-rich region that could be at greater risk for future earthquakes induced by production operations.

The new study, published this month in the journal The Leading Edge, provides a color-coded map of the 75,000-square mile region that identifies those potential oil and gas development sites that would be would be most likely to trigger an earthquake associated with fluid injection.

Previous Stanford research has shown that wastewater injected as a step in hydraulic fracturing (fracking) underlies an increase in seismic activity in parts of the central and eastern U.S., particularly in Oklahoma, starting in 2005. While none of these small-to-moderate earthquakes has yet caused significant property damage or injury, they represent an increased probability of larger earthquakes.

Now, Texas is poised to take center stage as the Permian Basin is becoming the country’s most important oil- and gas-producing region. In the 1920s, energy companies began extracting the basin’s bountiful petroleum deposits during a boom that lasted decades. More recently, the advance of hydraulic fracturing techniques has spurred a new development frenzy. Hundreds of thousands of wells could be drilled in the region in the next few decades.