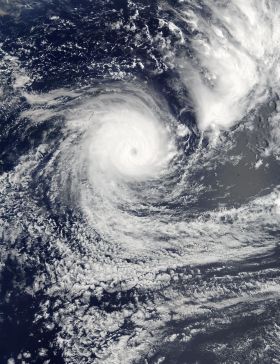 Hurricane Gita strengthened into a powerful Category 4 hurricane on Feb 12 and triggered warnings in Tonga and Fiji. NASA's Global Precipitation Measurement Mission or GPM core satellite analyzed Tropical Cyclone Gita and found heavy rainfall occurring within the system. On Feb. 12, Gita was bringing that heavy rain to Tonga and Fiji where warnings were posted. NASA's Terra satellite also provided a visible image of the storm, which had developed an eye.

On Feb. 8 when Gita formed and was drenching Samoa, the GPM core observatory satellite passed above at 9:26 a.m. EST (1426 UTC). Data collected by GPM's Microwave Imager (GMI) and Dual-Frequency Precipitation Radar (DPR) instruments showed the area and intensity of precipitation associated with the tropical cyclone. GPM, a joint satellite mission between NASA and the Japan Aerospace Exploration Agency, found that Gita was producing heavy rainfall over a large area that included the islands.

At the time, the center of the intensifying tropical cyclone was located just to the south of the islands. Rainfall measured by GPM's radar was falling at a rate of over 64 mm (2.5 inches) per hour. The heaviest rainfall was found by GPM in bands wrapping around the eastern side of Gita  Rain in one of those downpours northeast of Samoa was found falling at a rate of greater than  224 mm (8.8 inches) per hour.