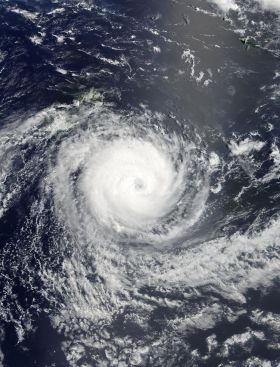 NASA's Terra satellite provided a visible image of Category 3 Tropical Cyclone Gita as it continues to bring heavy rainfall, powerful winds and storm surge to Fiji Islands after pounding the island of Tonga.

On Feb. 12, Gita hit Tonga with the force of a Category 4 hurricane with powerful winds and heavy rainfall, destroying structures and causing flooding. Tonga is a Polynesian kingdom that consists of more than 170 South Pacific islands, many uninhabited. The Tongan government declared a state of emergency on Monday, Feb. 12 and advised the public to stay off the roads. A statement from the Australian Minister of Foreign Affairs noted that Australia and New Zealand were sending humanitarian aid to Tonga.

A Category 3 hurricane on the Saffir-Simpson Hurricane Wind scale is a major hurricane. The scale defines a Category 3 storm as "Well-built framed homes may incur major damage or removal of roof decking and gable ends. Many trees will be snapped or uprooted, blocking numerous roads. Electricity and water will be unavailable for several days to weeks after the storm passes."