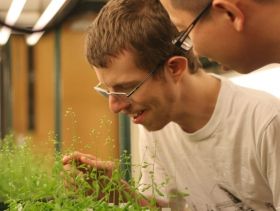 A team of University of Georgia researchers has developed a new way to breed plants with better traits. By introducing a human protein into the model plant species Arabidopsis thaliana, researchers found that they could selectively activate silenced genes already present within the plant.
Using this method to increase diversity among plant populations could serve to create varieties that are able to withstand drought or disease in crops or other plant populations, and the researchers have already begun testing the technique on maize, soy and rice. They published their findings in Nature Communications.