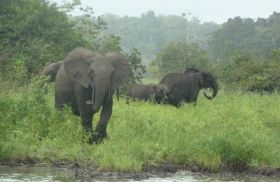 Poaching and habitat loss have reduced forest elephant populations in Central Africa by 63 percent since 2001. This widespread killing poses dire consequences not only for the species itself but also for the region’s forests, a new Duke University study finds.

“Without intervention to stop poaching, as much as 96 percent of Central Africa’s forests will undergo major changes in tree-species composition and structure as local populations of elephants are extirpated and surviving populations are crowded into ever-smaller forest remnants,” said John Poulsen, assistant professor of tropical ecology at Duke’s Nicholas School of the Environment.

These changes will occur because elephants are ecological engineers that help create and maintain forest habitat by dispersing seeds, recycling and spreading nutrients, and clearing understories, Poulsen explained.

“Because they are very large animals, they can eat fruits and disperse seeds too big for other animals to digest. And because they are highly mobile, they help disperse these seeds far and wide through their dung,” he said.