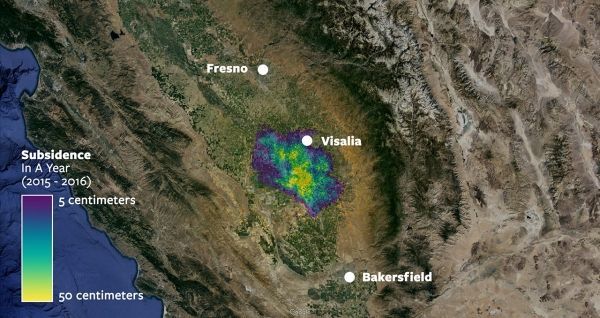 Researchers found that in spite of heavy rains in early 2017, groundwater extraction for agriculture and human use leads to a continual sinking of land, as seen from satellites.

Despite higher-than-normal amounts of rain in early 2017, the large agricultural and metropolitan communities that rely on groundwater in central California experienced only a short respite from an ongoing drought.

When the rain stopped, drought conditions returned and the ground has continued to sink, by up to a half-meter annually, according to a new Cornell study in Science Advances.

“With the heavy storms in early 2017, Californians were hopeful that the drought was over,” said Kyle Murray, a Cornell doctoral candidate in the field of geophysics. “There was a pause in land subsidence over a large area, and even uplift of the land in some areas. But by early summer the subsidence continued at a similar rate we observed during the drought.”