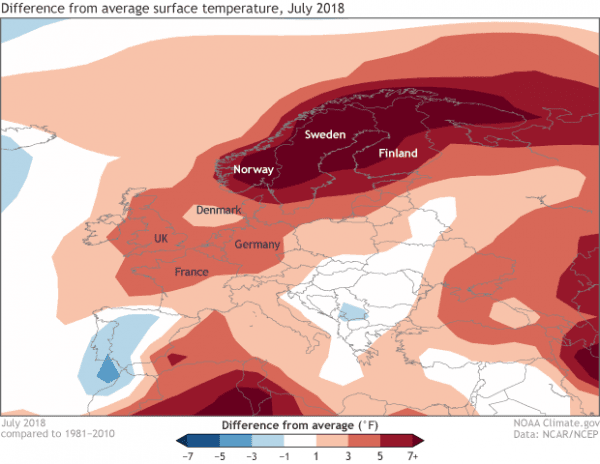 Prolonged heat and dryness during the summer of 2018 has turned formerly green fields into dusty, dying patches of soil all across Europe, leading to drought across many countries.

Prolonged heat and dryness during the summer of 2018 has turned formerly green fields into dusty, dying patches of soil all across Europe, leading to drought across many countries.

If you were an astronaut 250 miles above earth zipping over Europe at the end of August, instead of seeing green blanketing much of the continent, you’d be surprised to see a huge amount of brown. This drastic color change has happened over just a couple of months. In fact, all it takes to see a green Europe would be to go back in time to the beginning of June, after spring rains helped create a verdant green blanket. So what happened in the following two months?

It’s more like what hasn’t happened a lot. And that’s rain. A prolonged dry spell coupled with soaring, record-breaking temperatures has been a horrible combination for farms from Scandinavia and England in the north to France, Netherlands, and Germany to the south.  In particular, July was incredibly hot for northern Europe.

Temperatures in late July exceeded 90°F as far north as the Arctic Circle! In Norway, the far northern city of Badufoss hit 92°F on July 17. The city normally sees fewer than 25 days a year with a high over 68°F. In neighboring Finland, the town of Kevo also reached 92°F.  Finland as a whole set its all-time hottest July as well.