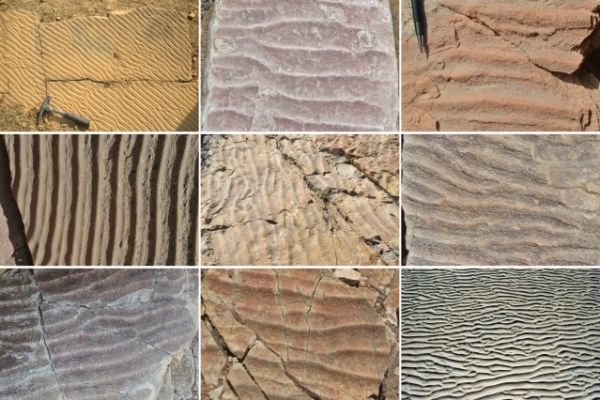 When a coastal tide rolls out, it can reveal beautiful ripples in the temporarily exposed sand. These same undulating patterns can also be seen in ancient, petrified seabeds that have been exposed in various parts of the world and preserved for millions or even billions of years.

Geologists look to ancient sand ripples for clues to the environmental conditions in which they formed. For instance, the spacing between ripples is proportional to the depth of the water and the size of the waves that molded the underlying ripples.

But sand ripples aren’t always perfectly parallel, carbon-copies of each other, and can display various kinks and sworls. Can these more subtle, seemingly random deviations or defects tell us something about the conditions in which a sandy seabed formed?

The answer, according to researchers from MIT and elsewhere, is yes. In a paper published online and appearing in the Oct. 1 issue of Geology, the team reports that some common defects found in both ancient and modern seabeds are associated with certain wave conditions. In particular, their findings suggest that ripple defects resembling hourglasses, zigzags, and tuning forks were likely shaped in periods of environmental flux — for instance, during strong storms, or significant changes in tidal flows.