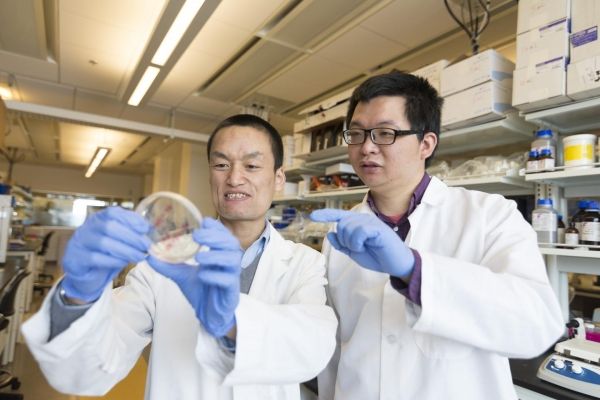 Published in the Journal of Biological Chemistry, their finding could be used as the basis for future development of treatment strategies and drugs to reduce heart disease risk in cancer survivors, especially those treated in childhood.

Recent improvements in the diagnosis and treatment of cancer have increased the survival odds of cancer patients. In the U.S., an estimated 16 million people — or 5 percent of the population — are cancer survivors. After cancer recurrence, heart disease is the number one cause of death in this group. Heart toxicity associated with the use of doxorubicin and related chemotherapy drugs is thought to be responsible for cancer survivors’ increased risk of developing heart disease.

Image: Assistant professor Zhaokang Cheng and postdoctoral fellow and co-author Peng Xia examine bacterial cultures used to grow genes of interest to their research, such as the CDK2 gene. The genes are then isolated and introduced into cardiac muscle cells to study their function. (Credit: Photo by Cori Kogan, Washington State University Health Sciences Spokane)