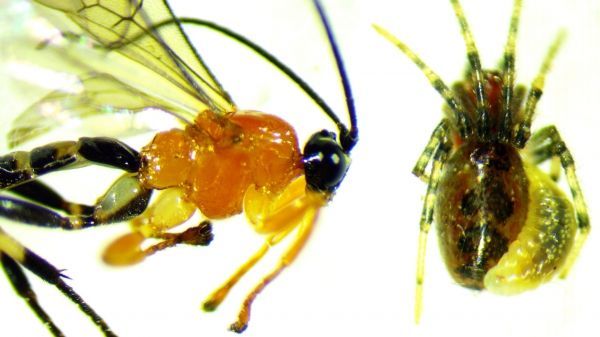 It sounds like the plot of the world’s tiniest horror movie: deep in the Ecuadorian Amazon, a newly discovered species of wasp transforms a “social” spider into a zombie-like drone that abandons its colony to do the wasp’s bidding.

That’s the gruesome, real-life discovery by University of British Columbia researchers, who detail the first example of a manipulative relationship between a new Zatypota species wasp and a social Anelosimus eximius spider in a study published recently in Ecological Entomology.

“Wasps manipulating the behaviour of spiders has been observed before, but not at a level as complex as this,” said Philippe Fernandez-Fournier, lead author of the study and former master’s student at UBC’s department of zoology. “Not only is this wasp targeting a social species of spider but it’s making it leave its colony, which it rarely does.”

Fernandez-Fournier was in Ecuador studying different kinds of parasites that live in the nests of Anelosimus eximius spiders, one of only about 25 species of “social” spiders worldwide. They are notable for living together in large colonies, cooperating on prey capture, sharing parental duties and rarely straying from their basket-shaped nests.

When Fernandez-Fournier noticed that some of the spiders were infected with a parasitic larva and spotted them wandering a foot or two away from their colonies to spin enclosed webs of densely spun silk and bits of foliage, he was puzzled. “It was very odd because they don’t normally do that, so I started taking notes,” he said.