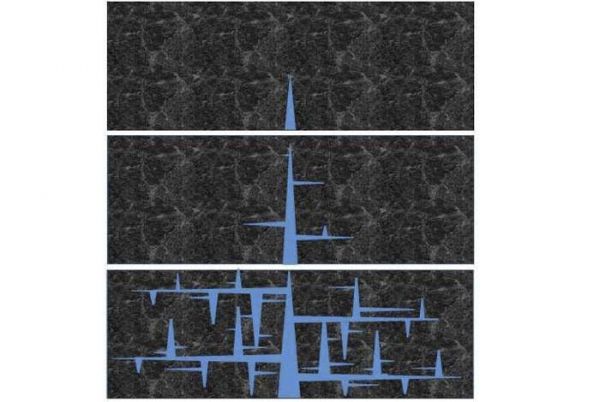 A new computational model could potentially boost efficiencies and profits in natural gas production by better predicting previously hidden fracture mechanics. It also accurately accounts for the known amounts of gas released during the process.

Despite the industry’s growth, much of the fracking process remains mysterious. Because fracking happens deep underground, researchers cannot observe the fracture mechanism of how the gas is released from the shale.

“This work offers improved predictive capability that enables better control of production while reducing the environmental footprint by using less fracturing fluid,” said Hari Viswanathan, computational geoscientist at Los Alamos National Laboratory. “It should make it possible to optimize various parameters such as pumping rates and cycles, changes of fracturing fluid properties such as viscosity, etc. This could lead to a greater percentage of gas extraction from the deep shale strata, which currently stands at about 5 percent and rarely exceeds 15 percent.”

Image: Branching into densely spaced hydraulic cracks is essential for effective gas or oil extraction from shale. It is suspected to occur, but the existing mathematical models and commercial software fail to predict it. A new paper from Northwestern University and Los Alamos National Laboratory presents a method to predict when the branching occurs, and how to control it.  CREDIT: Northwestern University