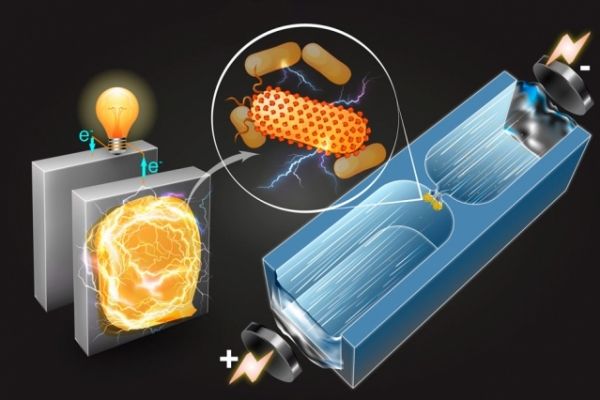 Living in extreme conditions requires creative adaptations. For certain species of bacteria that exist in oxygen-deprived environments, this means finding a way to breathe that doesn’t involve oxygen. These hardy microbes, which can be found deep within mines, at the bottom of lakes, and even in the human gut, have evolved a unique form of breathing that involves excreting and pumping out electrons. In other words, these microbes can actually produce electricity.

Scientists and engineers are exploring ways to harness these microbial power plants to run fuel cells and purify sewage water, among other uses. But pinning down a microbe’s electrical properties has been a challenge: The cells are much smaller than mammalian cells and extremely difficult to grow in laboratory conditions.

Now MIT engineers have developed a microfluidic technique that can quickly process small samples of bacteria and gauge a specific property that’s highly correlated with bacteria’s ability to produce electricity. They say that this property, known as polarizability, can be used to assess a bacteria’s electrochemical activity in a safer, more efficient manner compared to current techniques.