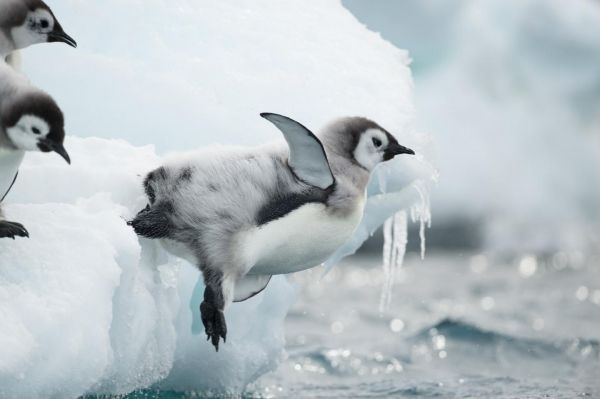 Emperor penguin chicks hatch into one of Earth’s most inhospitable places—the frozen world of Antarctica.

Emperor penguin chicks hatch into one of Earth’s most inhospitable places—the frozen world of Antarctica. Childhood in this environment is harsh and lasts only about five months, when their formerly doting parents leave the fledglings to fend for themselves.

New research by the Woods Hole Oceanographic Institution (WHOI) and colleagues reveals the previously unknown behaviors of juvenile Emperor penguins in their critical early months when they leave their birth colony and first learn how to swim, dive, and find food. The paper, published Jan. 17, 2019, in the journal Marine Ecology Progress Series, also highlights the unique connection between juvenile diving behaviors and a layer of the ocean, known as the thermocline, where warmer surface waters meet cooler deep waters below and where their prey likely gather in groups.

“This study provides insights into an important, but poorly understood, part of their life cycle, which is essential to being able to better predict the species’ response to future climate change,” says Sara Labrousse, a postdoctoral investigator at WHOI and lead author of the paper.

Researchers from Centre d’Etudes Biologiques de Chizé in France tagged 15 juvenile penguins before the animals left their colony in Terre Adélie during 2013 and 2014 fieldwork in December, when the weather usually starts to warm and the ice begins to break up, creating open waters near the nesting site.

Image: "When the chicks first go in the water, they are very awkward and unsure of themselves," says Sara Labrousse, a postdoctoral investigator at WHOI and lead author of the paper. "They are not the fast and graceful swimmers their parents are." (Credit: Photo by Vincent Munier)