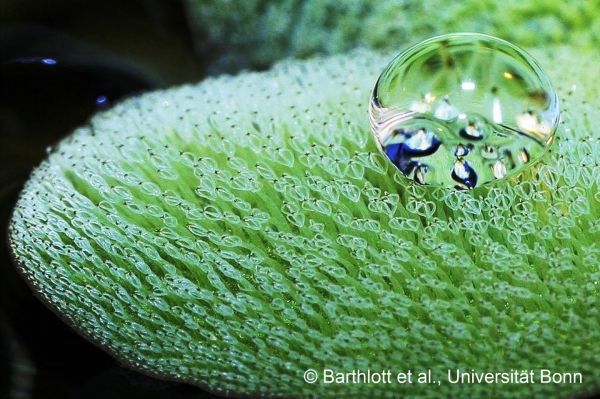 If ship hulls were coated with special high-tech air trapping materials, up to one percent of global CO2 emissions could be avoided.

If ship hulls were coated with special high-tech air trapping materials, up to one percent of global CO2 emissions could be avoided. This is the conclusion reached by scientists from the University of Bonn together with colleagues from St. Augustin and Rostock in a recent study. According to the study, ships could save up to 20 percent of fuel as a result of reduced drag. If so-called antifouling effects are also considered, such as the reduced growth of organisms on the hull, the reduction can even be doubled. The study has now been published in the journal “Philosophical Transactions A”.

Ships are among the worst fuel guzzlers in the world. Together, they burn an estimated 250 million tonnes per year and emit around one billion tonnes of carbon dioxide into the air - about the same amount as the whole of Germany emits over the same period. The main reason for this is the high degree of drag between hull and water, which constantly slows the ship down. Depending on the type of ship, drag accounts for up to 90 percent of energy consumption. This also makes it a huge economic factor: After all, fuel consumption is responsible for half of transport costs.

Drag can be significantly reduced using technical tricks. For example, the so-called “microbubbles technology” actively pumps air bubbles under the hull. The ship then travels over a bubble carpet, which reduces drag. However, the production of the bubbles consumes so much energy that the total savings effect is very small.

Image: The aquatic fern Salvinia molesta traps underwater in a thin layer of air, which it can hold for many weeks. (Credit: Prof. Dr. Wilhelm Barthlott/Uni Bonn)