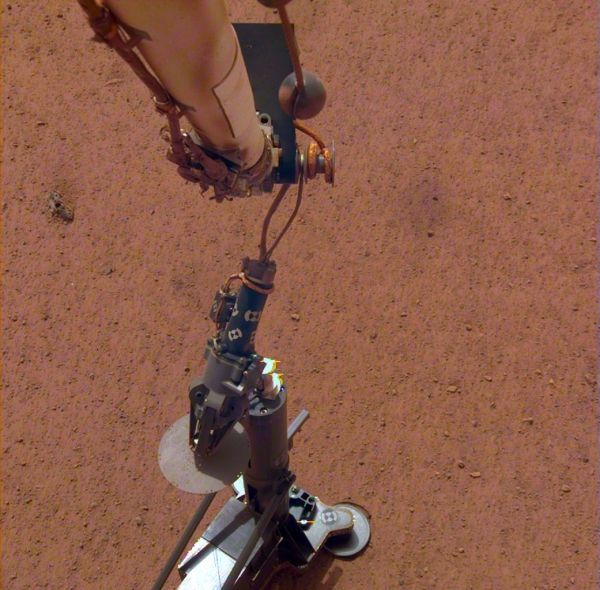 NASA's InSight lander has placed its second instrument on the Martian surface.

NASA's InSight lander has placed its second instrument on the Martian surface. New images confirm that the Heat Flow and Physical Properties Package, or HP3, was successfully deployed on Feb. 12 about 3 feet (1 meter) from InSight's seismometer, which the lander recently covered with a protective shield. HP3 measures heat moving through Mars' subsurface and can help scientists figure out how much energy it takes to build a rocky world.

Equipped with a self-hammering spike, mole, the instrument will burrow up to 16 feet (5 meters) below the surface, deeper than any previous mission to the Red Planet. For comparison, NASA's Viking 1 lander scooped 8.6 inches (22 centimeters) down. The agency's Phoenix lander, a cousin of InSight, scooped 7 inches (18 centimeters) down.

"We're looking forward to breaking some records on Mars," said HP3 Principal Investigator Tilman Spohn of the German Aerospace Center (DLR), which provided the heat probe for the InSight mission. "Within a few days, we'll finally break ground using a part of our instrument we call the mole."

HP3 looks a bit like an automobile jack but with a vertical metal tube up front to hold the 16-inch-long (40-centimeter-long) mole. A tether connects HP3's support structure to the lander, while a tether attached to the top of the mole features heat sensors to measure the temperature of the Martian subsurface. Meanwhile, heat sensors in the mole itself will measure the soil's thermal conductivity - how easily heat moves through the subsurface.