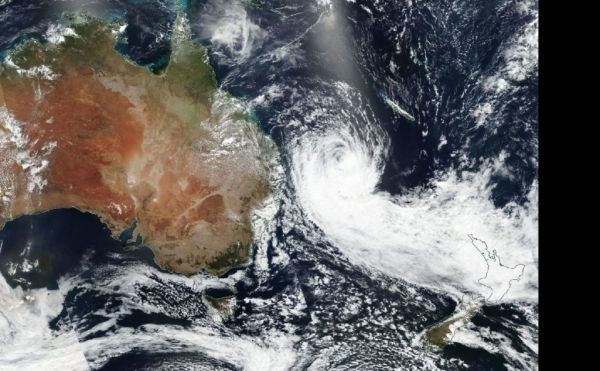 When you look at a Tropical Cyclone Oma from space, you’ll get a sense of its massive size.

When you look at a Tropical Cyclone Oma from space, you’ll get a sense of its massive size. While orbiting the Earth, NASA-NOAA’s Suomi NPP satellite provided a look at the large tropical storm in the Southern Pacific Ocean.

Oma weakened rapidly from a typhoon to a tropical storm, and on Feb 22, the Visible Infrared Imaging Radiometer Suite (VIIRS) instrument aboard NASA-NOAA’s Suomi NPP satellite captured a visible image of Oma. The VIIRS image also showed a long the bulk of clouds and thunderstorms pushed into the storm’s southern quadrant, looking like a large tail. That’s because northeasterly winds, or northeasterly vertical wind shear is pushing the clouds and tearing the storm apart. The Joint Typhoon Warning Center noted that rain bands, bands of thunderstorms that feed into the center, are unraveling, and the storm is elongating. Whenever a storm is no longer circular and elongates, it is a sign of weakening.