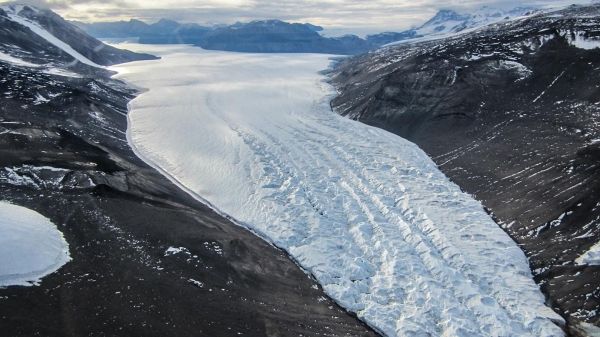 Buried in the ice of Antarctica are records of what Earth looked like 130,000 years ago, when the glaciers last melted—and what it might look like again as global warming accelerates.

As ice was laid down in successive layers from previous years, it acted like tree rings, recording weather patterns and circulation as Earth cycled through colder and warmer periods. In a new study, scientists found that volcanic dust embedded inside the ice samples suggests that the West Antarctic Ice Sheet collapsed during the last warm period 130,000 years ago—which researchers are eager to know because a similar collapse today would have major implications for the world’s population.

The results, obtained by drilling into Taylor Glacier and extracting ice samples, could help scientists flesh out our picture of the chain reactions that happen when the climate warms.

“There is some evidence from coral reefs that suggests the oceans were 16 to 30 feet higher during the last interglacial period then than they are today, so people really want to know where that extra water came from,” said Sarah Aarons, a University of Chicago postdoctoral researcher who led the study, which was published online Feb. 12 in Geophysical Research Letters.

Continue reading at University of Chicago

Image via University of Chicago