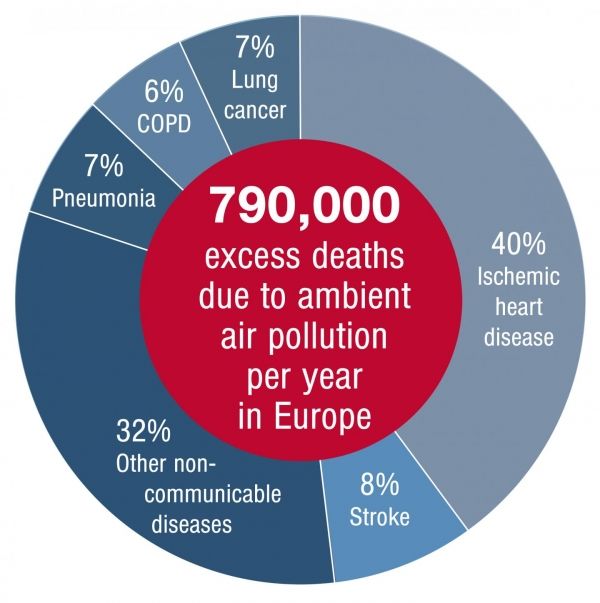 Air pollution could be causing double the number of excess deaths a year in Europe than has been estimated previously, according to a study published in the European Heart Journal [1] today (Tuesday).

Air pollution could be causing double the number of excess deaths a year in Europe than has been estimated previously, according to a study published in the European Heart Journal [1] today (Tuesday).

Using a new method of modelling the effects of various sources of outdoor air pollution on death rates, the researchers found that it caused an estimated 790,000 extra deaths in the whole of Europe in 2015 and 659,000 deaths in the 28 Member States of the European Union (EU-28). Of these deaths, between 40-80% were due to cardiovascular diseases (CVD), such as heart attacks and stroke. Air pollution caused twice as many deaths from CVD as from respiratory diseases.

The researchers found that air pollution caused an estimated 8.8 million extra deaths globally rather than the previously estimated 4.5 million. Co-author of the study, Professor Thomas Münzel, of the Department of Cardiology of the University Medical Centre Mainz in Mainz, Germany, said: “To put this into perspective, this means that air pollution causes more extra deaths a year than tobacco smoking, which the World Health Organization estimates was responsible for an extra 7.2 million deaths in 2015. Smoking is avoidable but air pollution is not.

“The number of deaths from cardiovascular disease that can be attributed to air pollution is much higher than expected. In Europe alone, the excess number of deaths is nearly 800,000 a year and each of these deaths represents an average reduction in life expectancy of more than two years.”

Image: Estimated excess mortality attributed to air pollution in Europe, and the contributing disease categories. At least 48 percent are due to cardiovascular disease (ischemic heart disease and stroke). A fraction of other non-communicable diseases should also be counted to cardiovascular diseases related mortality, with an upper limit of 32 percent. COPD, chronic obstructive pulmonary disease. (Credit: European Heart Journal)