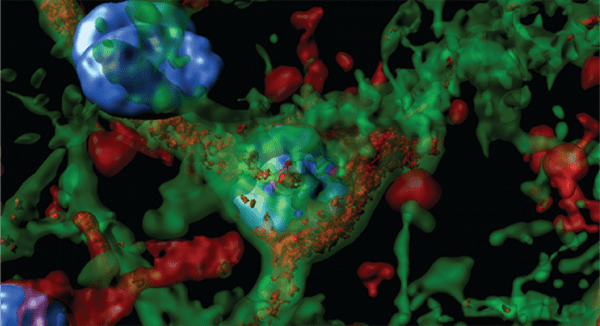 Scientists at Scripps Research have found that they can reverse the desire to drink in alcohol-dependent rats—with the flip of a switch.

Scientists at Scripps Research have found that they can reverse the desire to drink in alcohol-dependent rats—with the flip of a switch. The researchers were able to use lasers to temporarily inactivate a specific neuronal population, reversing alcohol-seeking behavior and even reducing the physical symptoms of withdrawal.

“This discovery is exciting—it means we have another piece of the puzzle to explain the neural mechanism driving alcohol consumption,” says Olivier George, PhD, an associate professor at Scripps Research and senior author of the new study, published March 18, 2019 in the journal Nature Communications.

Although the laser treatment is far from ready for human use, George believes identifying these neurons opens the door to developing drug therapies or even gene therapies for alcohol addiction.

“We need compounds that are specific to this neuronal circuitry,” George says.

Image: Confocal analysis at 63x magnification, followed by the three-dimensional reconstruction of neuronal cell bodies and branches. The image shows an example of eYFP and CRF in the same neuron. This rendered isosurface analysis demonstrated the colocalization of CRF immunoreactivity within CeA neurons that also expressed Cre-dependent eYFP and validates the crh-Cre rat as a tool to gain more direct access to CRF neurons to study their functional neuroanatomy.