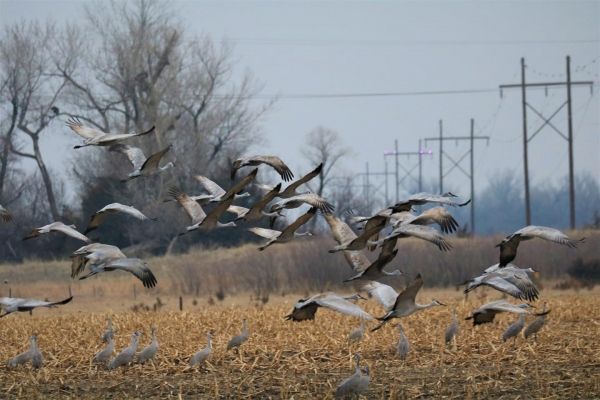 Crane species are declining around the world, and lethal collisions with power lines are an ongoing threat to many crane populations.

EDM International’s James Dwyer and his colleagues created what they dubbed the Avian Collision Avoidance System, or ACAS, by mounting UV lights on power lines’ supporting structures and shining them on the lines at night. They tested its effectiveness in 2018 at Nebraska’s Iain Nicolson Audubon Center, where a power line crosses the Central Platte River in key habitat for migrating Sandhill Cranes. Randomly assigning the ACAS to be on or off each night, they observed the behavior of cranes flying along the river at dusk and during the night. They documented 98% fewer collisions and 82% fewer dangerous flights when the ACAS was on and showed that cranes reacted sooner and with more control to avoid hitting the power lines.

“This project came about as a result of years of studying avian collisions with power lines throughout North America. My studies included collisions involving numerous species and families of birds, even on lines modified to industry standards to mitigate avian collisions, and I thought perhaps there could be a more effective approach,” says Dwyer. “Even so, I did not imagine that the ACAS would have the effect that it did—a 98% reduction in collisions! I thought it would have some effect, but I didn’t dare think the ACAS would pretty much solve the Sandhill Crane collision problem at our study site on our first try.”

Image: Sandhill Cranes are at risk of colliding with power lines as they approach their roosting sites at dusk. (Credit: James Dwyer, EDM International)