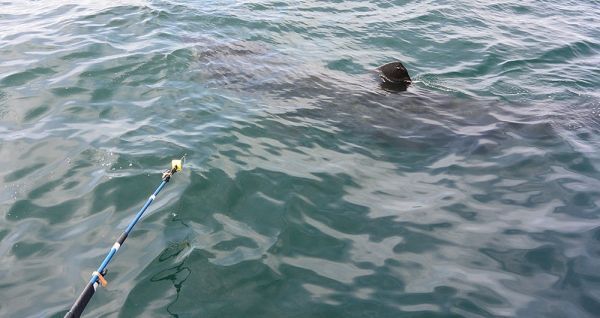 Spring is notoriously windy along the coast of California.

Spring is notoriously windy along the coast of California. Strong northwest winds can cause hazardous sea states to crop up out of nowhere, especially in the Santa Barbara Channel. But as dawn broke on a crisp April morning, the first rays of light revealed a glassy, calm channel. Not so much as a ripple disturbed the surface. These were perfect conditions for spotting one of the most elusive visitors to the channel’s waters: basking sharks.

Most mariners aren’t actively looking for giant, fearsome-looking marine creatures. But researchers from NOAA’s Channel Islands National Marine Sanctuary set out with – and accomplished – one goal: to put satellite tags on the gentle giants once seen in great numbers roaming the rich waters of the Santa Barbara Channel.

Prior to this, only four tags had been deployed on basking sharks in the eastern North Pacific and none had been deployed since 2011, despite many hours on the water. In recent years, basking shark sightings off of California have been rare, further complicating efforts to better understand these mysterious animals. With not one, but two, sharks tagged, this collaborative effort between NOAA scientists from the sanctuary and the Southwest Fisheries Science Center will bolster our understanding of these visitors to Channel Islands National Marine Sanctuary.