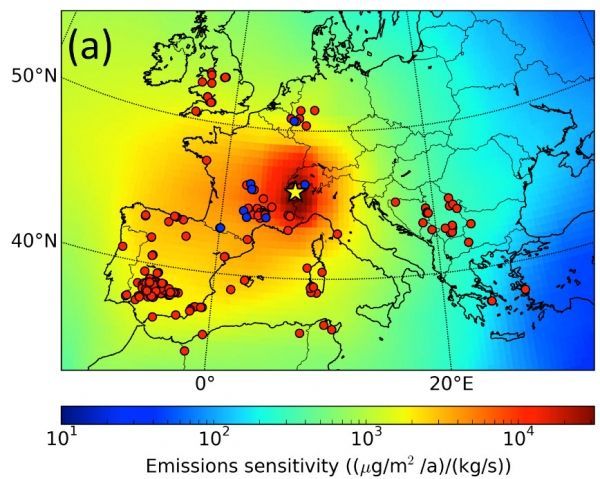 The deepest layers of carbon-14 dated ice found in the Col du Dôme of the Mont Blanc glacier in the French Alps provide a record of atmospheric conditions in the ancient Roman era.

The deepest layers of carbon-14 dated ice found in the Col du Dôme of the Mont Blanc glacier in the French Alps provide a record of atmospheric conditions in the ancient Roman era. Published inGeophysical Research Letters, the study, led by an international team and coordinated by a CNRS scientist at the Institute for Geosciences and Environmental Research (IGE)(CNRS/IRD/UGA/Grenoble INP)1, reveals significant atmospheric pollution from heavy metals: the presence of lead and antimony (detected in ancient alpine ice for the first time here) is linked to mining activity and lead and silver production by the ancient Romans, well before the industrial age, in fact.

Though less well dated than in Greenland, the Alpine record traces the major periods of prosperity in Roman antiquity (see figure 1), with two very distinct peaks in lead emissions noted during the Republican period (between 350 and 100 B.C.) and Imperial period (between 0 and 200 A.D.) Romans extracted lead ore (containing silver) to produce the lead needed to make plumbing and silver for coins. The silver was extracted from the lead by heating the ore to a temperature of 1200°C, releasing significant amounts of lead into the atmosphere. While this was already documented in continental peat records, obtaining global data at the European level was difficult. This first-ever study of Ancient-era pollution using Alpine ice provides better insight into the impact of these ancient emissions on the present-day environment in Europe, as well as a comparison with more recent pollution linked to the use of lead petrol between 1950 and 1985.

Figure: Simulations to assess the sensitivity of lead deposits in the Col du Dôme (yellow) to the geographical location of the emission. This map also indicates the location of major mines known to have existed in Roman antiquity. In the approximately 500-km region around the Alps, in blue, mines believed to have been active in the Republican period, and in red, those active later. Outside this radius, all other mines are indicated in red (all eras combined). Alpine ice is therefore representative of the high-altitude atmosphere which receives emissions from France, Spain, Italy, islands in the Mediterranean Basin, and, to a lesser degree, Germany and England.  CREDIT: Preunkert