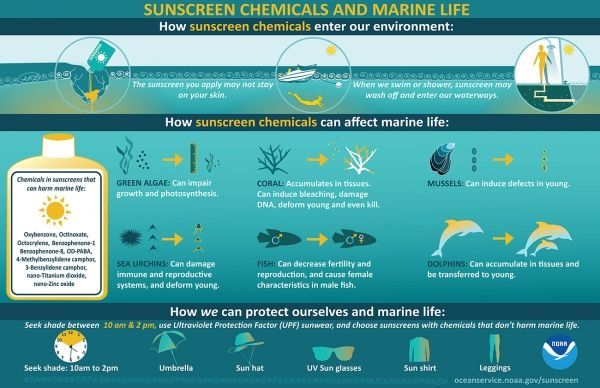 Common chemicals used in thousands of products to protect against harmful effects of ultraviolet light threaten corals and other marine life.

Common chemicals used in thousands of products to protect against harmful effects of ultraviolet light threaten corals and other marine life.

Healthy coral reefs are one of the most valuable ecosystems on Earth. They provide billions of dollars in economic and environmental services, such as food, coastal protection, and tourism. However, coral ecosystems around the world face serious threats from a number of sources, including climate change, unsustainable fishing, land-based pollution, coastal development, disease, and invasive species. Recently, scientists have discovered that some of the chemicals found in sunscreen and other personal health products also threaten the health of coral reefs. Two of those studies, led by NOAA researchers and partners, are detailed below. How these, and other compounds, affect reef ecosystems remains an active area of research among scientists.

In a 2016 study, a team of international scientists found that a common chemical in many sunscreen lotions and cosmetics is highly toxic to juvenile corals and other marine life. Oxybenzone, or BP-3, is found in more than 3,500 skin care products worldwide for protection against the sun's harmful effects. The compound has been found entering the environment both through wastewater effluent and directly from swimmers wearing sunscreens.