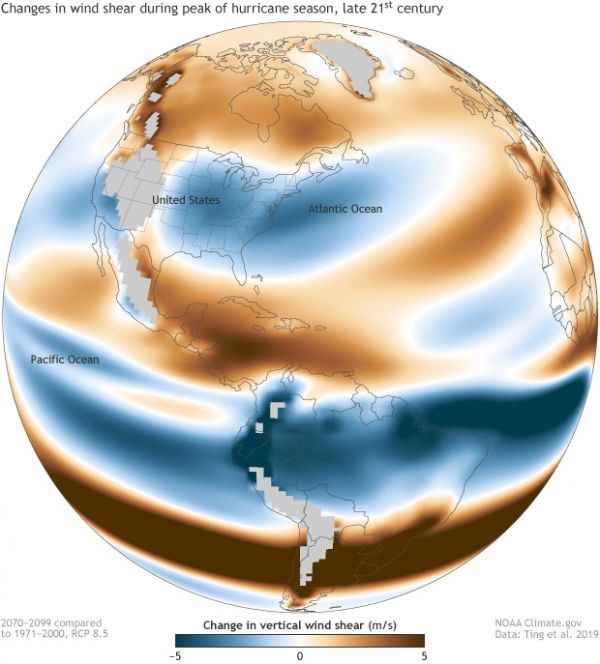 New model simulations of future Atlantic hurricane seasons suggest that higher greenhouse gas emissions will reduce vertical wind shear in an inconvenient place: along the U.S. East Coast. Inconvenient because active hurricane eras, such as the one we’ve been experiencing since the mid-1990s, tend to simultaneously produce relatively high vertical wind shear along the U.S. East Coast. This shear acts like a “speed bump” to landfalling hurricanes, making them less likely to rapidly intensify before coming ashore.

The map at right shows how vertical wind shear at the peak of hurricane season is projected to change by the end of the 21st century (2070-2099) compared to the end of the 20th century (1971-2000). Places where vertical wind shear is projected to relax are colored blue, while places where wind shear is projected to increase are brown. The simulations were based on a hypothetical pathway of greenhouse gas emissions in which carbon dioxide and other greenhouse gas emissions continue increasing at a relatively high rate in coming decades.

A broad area of blue across the eastern United States indicates that the region is projected to experience a decrease in vertical wind shear during peak hurricane season (August-October) by the end of the century. At least 75% of the model simulations in this area agreed that wind shear would decline, indicating a high amount of confidence in the change. (The exact locations of the transition zones between areas of increasing and decreasing shear are more uncertain.)