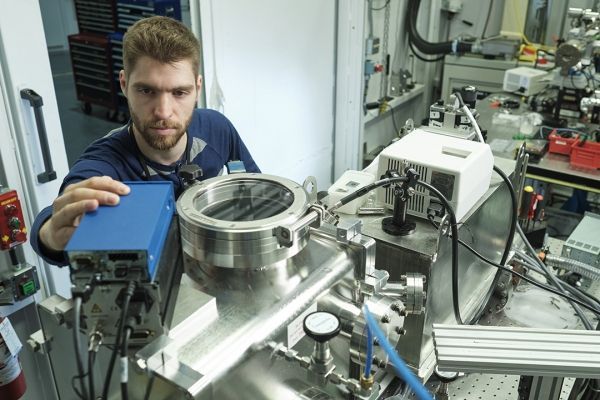 University of Saskatchewan (USask) PhD student Arthur Situm has developed a new non-invasive technique to study the rusting of steel.

University of Saskatchewan (USask) PhD student Arthur Situm has developed a new non-invasive technique to study the rusting of steel, research that may help with the safety of potash mining and construction of buildings, roads and bridges.

At the Canadian Light Source (CLS) synchrotron, a national research facility of USask, Situm has been studying how the protective coatings of rebars—the steel reinforcing bars used to strengthen concrete —withstand rusting (corrosion). He did his research with the potash mining industry especially in mind.

Salt from potash mining seeps through the porous concrete and may cause rebar to rust faster, which could require more frequent replacements. The world’s largest reserves of potash, mainly used for crop fertilizer, are in Saskatchewan and the industry is integral to the provincial economy, making up nearly 30 per cent of the mineral’s worldwide production in 2017.

“Concrete usually holds up pretty well even when the rebar is somewhat rusted, but the method I developed helps you determine at which point the protective coatings of the rebars fail, so that researchers can develop better coatings,” said Situm.

Unlike other methods used to study corrosion, Situm’s new synchrotron technique, which stems from a combination of X-rays, a microscope and the CLS particle accelerator, shows how effective the coatings are without removing them from the rebars. Normally, coating removal damages samples by making them unusable for future testing and may interfere with the corrosion of the coating itself.

Image via University of Saskatchewan.