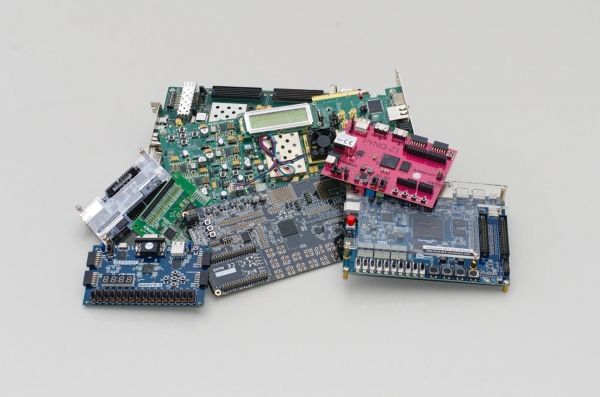 Field-programmable gate arrays (FPGAs) are, so to say, a computer manufacturer’s “Lego bricks”: electronic components that can be employed in a more flexible way than other computer chips.

Field-programmable gate arrays (FPGAs) are, so to say, a computer manufacturer’s “Lego bricks”: electronic components that can be employed in a more flexible way than other computer chips. Even large data centers that are dedicated to cloud services, such as those provided by some big technology companies, often resort to FPGAs. To date, the use of such services has been considered as relatively secure. Recently, however, scientists at Karlsruhe Institute of Technology (KIT) uncovered potential gateways for cyber criminals, as they explain in a report published in the IACR journal. (DOI: 10.13154)

While conventional computer chips mostly perform a very specific task that never changes, FPGAs are capable of assuming nearly every function of any other computer chip. This often makes them first choice for the development of new devices or systems. “FPGAs are for example built into the first product batch of a new device because, unlike special chips whose development only pays off when produced in high volumes, FPGAs can still be modified later,” says Dennis Gnad, a member of the Institute of Computer Engineering (ITEC) at KIT. The computer scientist compares this to a sculpture made from reusable Lego bricks instead of a modeling compound that can no longer be modified once it has hardened.

Therefore, the fields of application of these digital multi-talents span the most diverse sectors, such as smartphones, networks, the Internet, medical engineering, vehicle electronics, or aerospace. Having said that, FPGAs stand out by their comparatively low current consumption, which makes them ideally suited for the server farms run by cloud service providers. A further asset of these programmable chips is that they can be partitioned at will. “The upper half of the FPGA can be allocated to one customer, the lower half to a second one,” says Jonas Krautter, another ITEC member. Such a use scenario is highly desirable for cloud services, where tasks related e.g. to databases, AI applications, such as machine learning, or financial applications have to be performed.