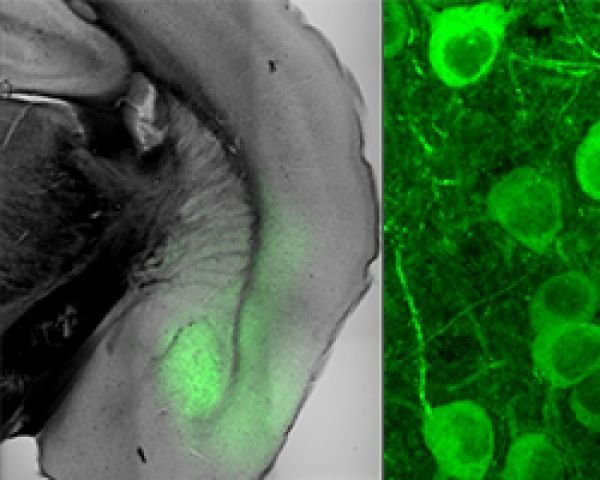 Our actions are driven by “internal states” such as anxiety, stress, hunger or thirst – which will strongly affect and motivate our behaviors.

Our actions are driven by “internal states” such as anxiety, stress, hunger or thirst – which will strongly affect and motivate our behaviors. Not much is known about how such states are represented by complex brain-wide circuits, including sub-cortical structures such as the amygdala. In a study recently published in Science, the group of Andreas Lüthi used a deep brain imaging technique to monitor amygdala activity in active mice and revealed the neuronal dynamics encoding behavioral states.

When a mouse is hungry, it is going to forage for food; when it is anxious, it is going to stop exploring its environment and freeze or flee. How such internal states correlate with the behavior of an animal has been studied in detail. However, little is known about how the brain encodes and controls internal states.

Jan Gründemann, a SNF Ambizione Fellow in Lüthi’s group and now a professor at the University of Basel, joined forces with Yael Bitterman, a computational neuroscientist working as a postdoc in the Lüthi group, to investigate the neuronal activity in the amygdala of freely moving mice in various states. The amygdala is a small almond-shaped brain structure that is considered a hub for regulating affective, homeostatic (hunger and thirst) and social behaviors via widespread connections with many brain regions. The amygdala is suggested to play a role in the coordination of brain states, but that role is not well understood.