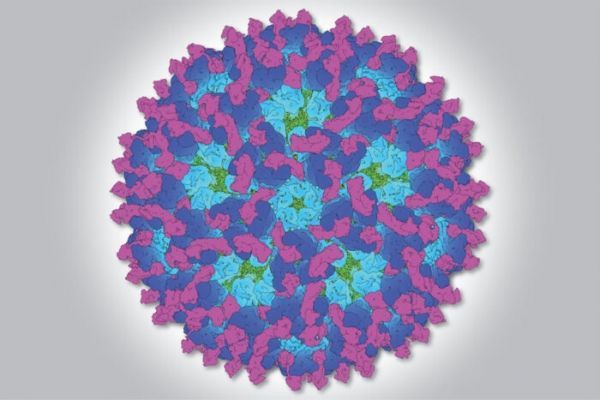 Chikungunya virus, once confined to the Eastern Hemisphere, has infected more than 1 million people in the Americas since 2013, when mosquitoes carrying the virus were discovered in the Caribbean.

Chikungunya virus, once confined to the Eastern Hemisphere, has infected more than 1 million people in the Americas since 2013, when mosquitoes carrying the virus were discovered in the Caribbean. Most people who become infected develop fever and joint pain that last about a week. But in up to half of patients, the virus can cause severe arthritis that persists for months or years. There is no treatment to prevent the short-lived infection from persisting into chronic arthritis.

Now, researchers have uncovered information that could help stop the debilitating condition. A team at Washington University School of Medicine in St. Louis has snapped high-resolution pictures of the virus latched onto a protein found on the surface of cells in the joints. The protein used in the study was taken from mice, but people have the same protein, and the virus interacts with the mouse and human proteins in virtually identical ways.

The structures, published May 9 in the journal Cell, shows in atomic-level detail how the virus and cell-surface protein fit together – data that promises to accelerate efforts to design drugs and vaccines to prevent or treat arthritis caused by chikungunya or related viruses.

“Chikungunya arthritis comes on very suddenly and can be very painful – people can barely walk around – and we have nothing specific to treat or prevent it,” said co-senior author Michael S. Diamond, MD, PhD, the Herbert S. Gasser Professor of Medicine, and a professor of molecular microbiology, and of pathology and immunology.

Researchers at Washington University School of Medicine in St. Louis have created a detailed 3-D structure of chikungunya virus (shown in blue and green) attached to a mouse protein (in magenta) that the virus uses to get inside cells and cause disease. The findings could accelerate efforts to find new ways to prevent or treat viral arthritis. (Credit: Katherine Basore)