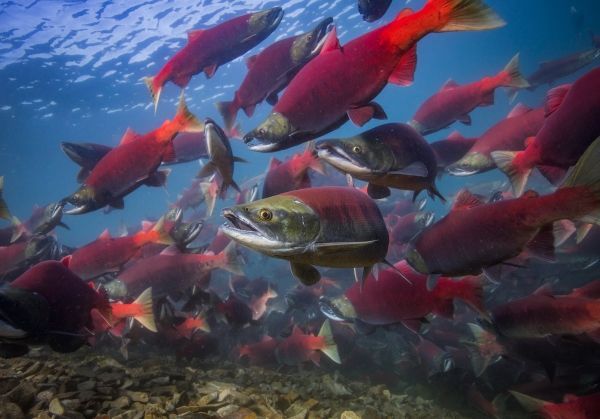 An ample buffet of freshwater food, brought on by climate change, is altering the life history of one of the world’s most important salmon species.

An ample buffet of freshwater food, brought on by climate change, is altering the life history of one of the world’s most important salmon species.

Sockeye salmon in Alaska’s Bristol Bay region are skipping an entire year in freshwater because climate change has produced more favorable conditions in lakes and streams, which allow the young fish to grow and put on weight much faster. Previously, these fish would spend up to two years in their birth lakes before heading to the ocean, where they feed and reach maturity two to three years later. Now they are more likely to head out to sea after only one year.

These findings were published May 27 in Nature Ecology & Evolution by University of Washington researchers.

“Climate change is literally speeding up the early part of their lifecycle across the whole region,” said senior author Daniel Schindler, a UW professor in the School of Aquatic and Fishery Sciences. “We know climate warming is making rivers more productive for the food juvenile salmon eat, meaning their growth rate is speeding up. That puts the salmon on a growth trajectory that moves them to the ocean faster.”