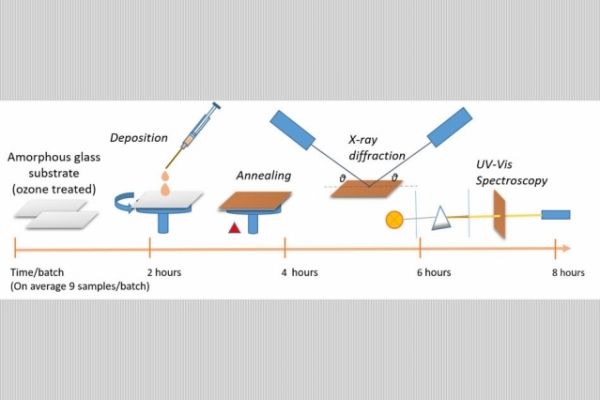 A broad class of materials called perovskites is considered one of the most promising avenues for developing new, more efficient solar cells.

A broad class of materials called perovskites is considered one of the most promising avenues for developing new, more efficient solar cells. But the virtually limitless number of possible combinations of these materials’ constituent elements makes the search for promising new perovskites slow and painstaking.

Now, a team of researchers at MIT and several other institutions has accelerated the process of screening new formulations, achieving a roughly ten-fold improvement in the speed of the synthesis and analysis of new compounds. In the process, they have already discovered two sets of promising new perovskite-inspired materials that are worthy of further study.

Their findings are described this week in the journal Joule, in a paper by MIT research scientist Shijing Sun, professor of mechanical engineering Tonio Buonassisi, and 16 others at MIT, in Singapore, and at the National Institute of Standards and Technology in Maryland.

Illustration: Diagram depicts the sequence of steps used in the new streamlined process to synthesize perovskite-based materials, deposit them on a substrate to create a thin film, and then analyze the film’s characteristics using X-ray diffraction and other observational methods. The new process is about ten times faster than previous methods.  Illustration courtesy of the researchers