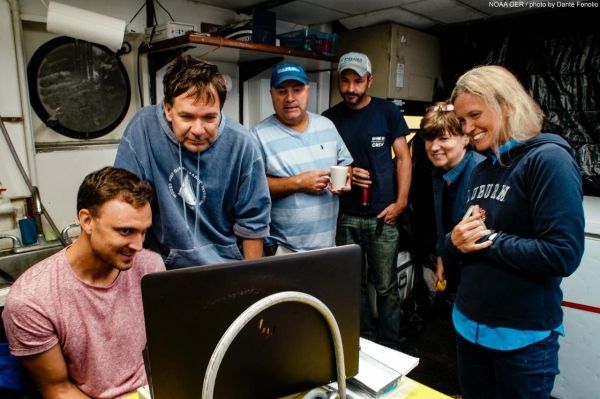 Scientists are usually pictured on screen as sober and humorless types, pre-occupied with numbers and empty facts.

Scientists are usually pictured on screen as sober and humorless types, pre-occupied with numbers and empty facts. However, nothing could be further from the truth, at least among the scientists we know. We are deeply passionate about our fields, sometimes to the point of obsession. Yet we are also trained from the beginning to control this passion, not so that we can be seen as serious or important, but so that we don't fool ourselves. It is so easy to fall in love with an idea to the point that we can convince ourselves that it's true even when the data do not agree. And so we fight to keep ourselves in check – to not get too excited. We're like cars with the gas and brake pedal pushed to the floor; roaring, but also holding ourselves in place. Now and then, we get to take our foot off the brake...and it all comes loose.

Wednesday, June 19, was such a day. It was our fifth deployment of the Medusa. Our fifth time paying out thousands of feet of blue plastic line by hand (on Monday), and our fifth time reeling it slowly in to the happy clicking of the capstan (on Tuesday). It was raining, and Nathan Robinson was trying to pack the boxes with line as fast as possible. When you do something over and over, it can be fun to try to beat the standing record.

Then on Wednesday, Nathan started looking at the downloaded videos. He found the usual shrimp and other small animals that we had been seeing on the first four deployments. And then he saw it, a large tubular animal off on the corner of the screen, looking as if it was hunting the e-jelly. The next short video showed the same thing. Then, in the third video, the tubular animal revealed an enormous set of arms and tentacles coming in to attack the e-jelly.