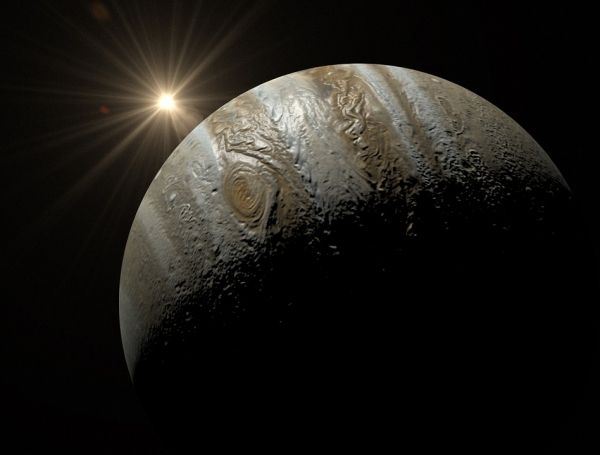 An international team of researchers has succeeded in measuring the current system responsible for Jupiter’s aurora.

An international team of researchers has succeeded in measuring the current system responsible for Jupiter’s aurora. Using data transmitted to Earth by NASA’s Juno spacecraft, they showed that the direct currents were much weaker than expected and that alternating currents must therefore play a special role. On Earth, on the other hand, a direct current system creates its aurora. Jupiter’s electric current system is kept going in particular by large centrifugal forces, which hurl ionized sulfur dioxide gas from the gas giant’s moon Io through the magnetosphere.

Professor Dr Joachim Saur from the Institute of Geophysics and Meteorology at the University of Cologne was involved in the project. The article ‘Birkeland currents in Jupiter’s magnetosphere observed by the polar-orbiting Juno spacecraft’ is published in the current issue of Nature Astronomy.

Jupiter, the largest planet in the solar system, has the brightest aurora, with a radiant power of 100 terawatts (100,000,000,000 kilowatts = one hundred billion KW). 100,000 power plants would be needed to produce this light. Similarly to the ones on Earth, Jupiter’s aurora display themselves as two huge oval rings around the poles. They are driven by a gigantic system of electrical currents that connects the polar light region with Jupiter’s magnetosphere. The magnetosphere is the region around a planet that is influenced by its magnetic field. Most of the electric currents run along Jupiter’s magnetic field lines, also known as Birkeland currents.

Read more at University of Cologne