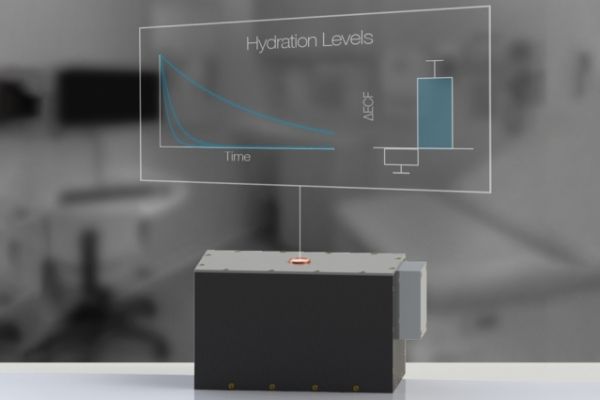 For patients with kidney failure who need dialysis, removing fluid at the correct rate and stopping at the right time is critical.

For patients with kidney failure who need dialysis, removing fluid at the correct rate and stopping at the right time is critical. This typically requires guessing how much water to remove and carefully monitoring the patient for sudden drops in blood pressure.

Currently there is no reliable, easy way to measure hydration levels in these patients, who number around half a million in the United States. However, researchers from MIT and Massachusetts General Hospital have now developed a portable sensor that can accurately measure patients’ hydration levels using a technique known as nuclear magnetic resonance (NMR) relaxometry.

Such a device could be useful for not only dialysis patients but also people with congestive heart failure, as well as athletes and elderly people who may be in danger of becoming dehydrated, says Michael Cima, the David H. Koch Professor of Engineering in MIT’s Department of Materials Science and Engineering.

Photo: MIT researchers have developed a noninvasive hydration sensor that is based on the same technology as MRI, but, unlike MRI scanners, it can fit in a doctor’s office.  CREDIT: Lina Colucci, Andrew Hall