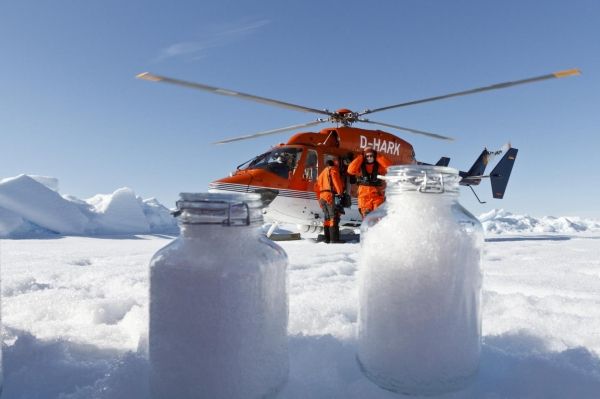 Over the past several years, microplastic particles have repeatedly been detected in seawater, drinking water, and even in animals.

Over the past several years, microplastic particles have repeatedly been detected in seawater, drinking water, and even in animals. But these minute particles are also transported by the atmosphere and subsequently washed out of the air, especially by snow – and even in such remote regions as the Arctic and the Alps. This was demonstrated in a study conducted by experts at the Alfred Wegener Institute and at the Swiss WSL Institute for Snow and Avalanche Research SLF, recently published in the journal Science Advances.

The fact that our oceans are full of plastic litter has by now become common knowledge: year after year, several million tonnes of plastic litter find their way into rivers, coastal waters, and even the Arctic deep sea. Thanks to the motion of waves, and even more to UV radiation from the sun, the litter is gradually broken down into smaller and smaller fragments – referred to as microplastic. This microplastic can be found in marine sediment, in seawater, and in marine organisms that inadvertently ingest it. In comparison, there has been little research to date on whether, and if so, to what extent, microplastic particles are transported by the atmosphere. Only a handful of works are available, e.g. from researchers who were able to confirm the particles’ presence in the Pyrenees and near major urban centres in France and China.

A team of experts from the Alfred Wegener Institute, Helmholtz Centre for Polar and Marine Research (AWI) has now found that microplastic particles can apparently be transported over tremendous distances by the atmosphere and are later washed out of the air by precipitation, particularly snow. As the team led by Dr Melanie Bergmann and Dr Gunnar Gerdts report in the journal Science Advances, the analyses they conducted on snow samples from Helgoland, Bavaria, Bremen, the Swiss Alps and the Arctic confirm that the snow at all sites contained high concentrations of microplastic – even in remote reaches of the Arctic, on the island Svalbard, and in snow on drifting ice floes. “It’s readily apparent that the majority of the microplastic in the snow comes from the air,” says Melanie Bergmann. Her hypothesis is supported by past research conducted on grains of pollen, in which experts confirmed that pollen from the middle latitudes is transported by the air to the Arctic. These grains are roughly the same size as the microplastic particles; similarly, dust from the Sahara can cover distances of 3,500 km or more, reaching the northeast Atlantic.

Image: Scientists from the Alfred Wegener Institute use the board helicopter from the icebreaking research vessel Polarstern to collect snow samples. Even in the Arctic the snow is polluted with microplastics. (Credit: Alfred-Wegener-Institut / Mine Tekman)