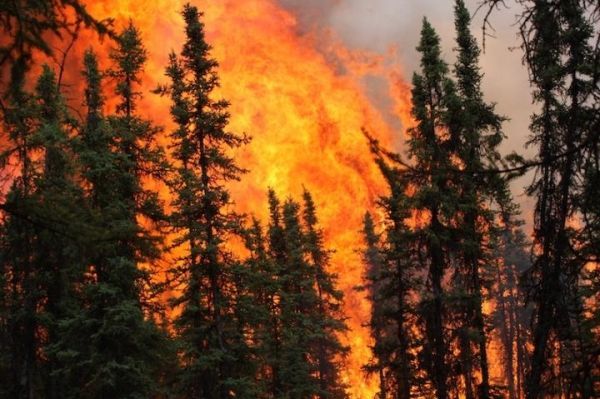 This summer, Alaska has experienced record high temperatures and devastating wildfires. If such events become more frequent, how might that impact our northernmost forests?

This summer, Alaska has experienced record high temperatures and devastating wildfires. If such events become more frequent, how might that impact our northernmost forests? A team of researchers led by the Department of Energy’s Lawrence Berkeley National Laboratory (Berkeley Lab) projected that the combination of climate change and increased wildfires will cause the iconic evergreen conifer trees of Alaska to get pushed out in favor of broadleaf deciduous trees, which shed their leaves seasonally.

Using a well-tested ecosystem model called ecosys, they predicted that by the year 2100 the relative dominance of evergreen conifer trees (black spruce) will decline by 25% and non-woody herbaceous plants such as moss and lichen will decline by 66%, while broadleaf deciduous trees (aspen) will become dominant, nearly doubling in prevalence. With such large declines, this shift in vegetation will highly likely have reverberations for the entire ecosystem and climate.

“Expansion of the deciduous broadleaf forests in a warmer climate may result in several ecological and climatic feedbacks that affect the carbon cycle of northern ecosystems,” said Zelalem Mekonnen, a Berkeley Lab postdoctoral fellow who was first author of the study.

The paper, “Expansion of High-Latitude Deciduous Forests Driven by Interactions Between Climate Warming and Fire,” was published today in Nature Plants. The study was funded as part of DOE’s Office of Science through the Next-Generation Ecosystem Experiment—Arctic project and included co-authors from UC Irvine, the University of Alberta, and Woods Hole Research Center. NGEE-Arctic seeks to gain a predictive understanding of the Arctic terrestrial ecosystem’s feedback to climate and is a collaboration among scientists at Oak Ridge National Laboratory, Berkeley Lab, Los Alamos National Laboratory, Brookhaven National Laboratory, and the University of Alaska Fairbanks.