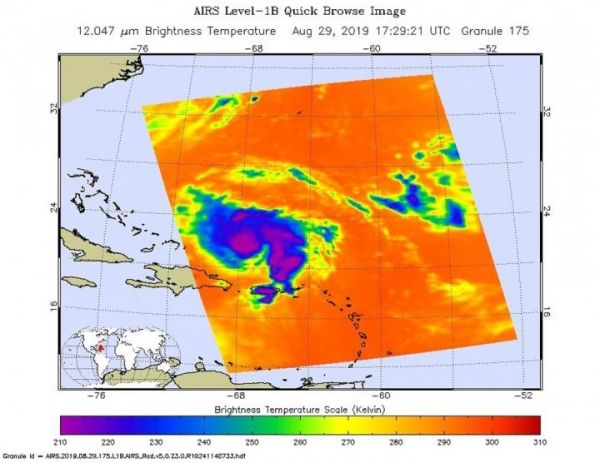 The National Hurricane Center (NHC) in Miami reports that an Air Force plane is finding Dorian a “little stronger” as of the 8:00am EDT advisory put out today, Aug. 30, 2019.

The National Hurricane Center (NHC) in Miami reports that an Air Force plane is finding Dorian a “little stronger” as of the 8:00am EDT advisory put out today, Aug. 30, 2019.  Data from an Air Force Reserve reconnaissance aircraft indicate that maximum sustained winds have increased to near 110 mph (175 km/h) with higher gusts. That is in keeping with what weather forecasters are predicting for the storm.

On Aug. 29, 2019, NASA’s Aqua satellite captured this infrared image with the AIRS instrument which analyzed cloud top temperatures in the storm. The coldest temperatures AIRS found were in the center of the storm where the strongest thunderstorms are found. These storms were as cold as or colder than minus 63 degrees Fahrenheit (minus 53 degrees Celsius). NASA research has found that cloud top temperatures that cold indicate strong storms with the potential to generate heavy rainfall.

At 8:00 am EDT (1200 UTC), the NHC reported that “the the center of Hurricane Dorian was located near latitude 24.2 North, longitude 69.4 West. Dorian is moving toward the northwest near 12 mph (19 km/h), and this motion is expected to continue through today. A slower west-northwestward to westward motion is forecast to begin tonight and continue through the weekend. On this track, Dorian should move over the Atlantic well east of the southeastern and central Bahamas today, approach the northwestern Bahamas Saturday, and move near or over portions of the northwestern Bahamas on Sunday.”

Dorian is expected to strengthen during the next few days, and become a major hurricane later today (Aug. 30). Dorian is likely to remain an extremely dangerous hurricane while it moves near the northwestern Bahamas and approaches the Florida peninsula through the weekend.