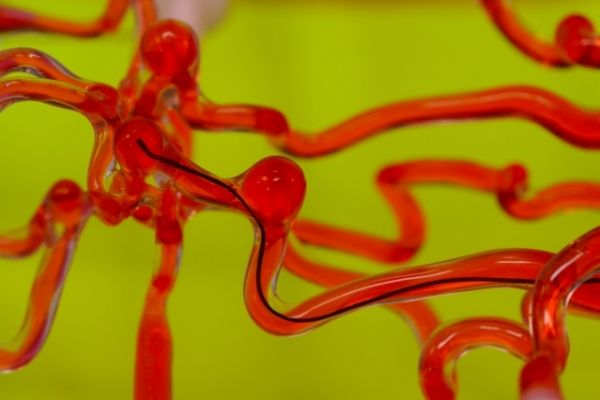 MIT engineers have developed a magnetically steerable, thread-like robot that can actively glide through narrow, winding pathways, such as the labrynthine vasculature of the brain.

MIT engineers have developed a magnetically steerable, thread-like robot that can actively glide through narrow, winding pathways, such as the labrynthine vasculature of the brain.

In the future, this robotic thread may be paired with existing endovascular technologies, enabling doctors to remotely guide the robot through a patient’s brain vessels to quickly treat blockages and lesions, such as those that occur in aneurysms and stroke.

“Stroke is the number five cause of death and a leading cause of disability in the United States. If acute stroke can be treated within the first 90 minutes or so, patients’ survival rates could increase significantly,” says Xuanhe Zhao, associate professor of mechanical engineering and of civil and environmental engineering at MIT. “If we could design a device to reverse blood vessel blockage within this ‘golden hour,’ we could potentially avoid permanent brain damage. That’s our hope.”

Image: MIT engineers have developed robotic thread (in black) that can be steered magnetically and is small enough to work through narrow spaces such as the vasculature of the human brain. The researchers envision the technology may be used in the future to clear blockages in patients with stroke and aneurysms.  Image courtesy of the researchers