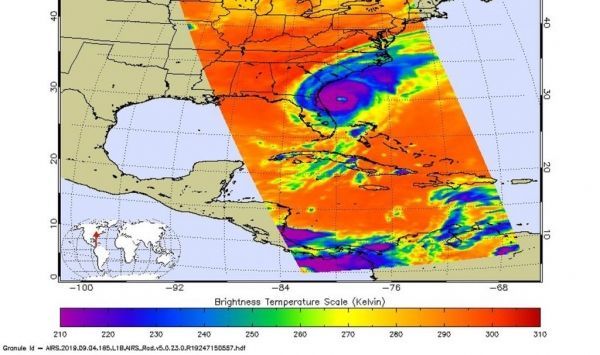 Hurricane Dorian continues to generate tremendous amounts of rainfall, and has left over three feet of rain in some areas of the Bahamas and is now lashing the Carolinas.

Hurricane Dorian continues to generate tremendous amounts of rainfall, and has left over three feet of rain in some areas of the Bahamas and is now lashing the Carolinas. NASA’s IMERG product provided a look at those rainfall totals.

By Thursday morning, September 5, Hurricane Dorian had dumped heavy rain on coastal South Carolina.  An even greater accumulation of over 10 inches was occurring off shore along the path of Dorian’s inner core.  In part because of Hurricane Dorian’s forward motion during the past two days, the recent rainfall totals have remained below the 36-inch accumulation observed when Dorian was stalled over the Bahamas.

NASA has the ability to estimate the rainfall rates occurring in a storm or how much rain has fallen. Rainfall imagery was generated using the Integrated Multi-satEllite Retrievals for GPM or IMERG product at NASA’s Goddard Space Flight Center in Greenbelt, Maryland. These near-realtime rain estimates come from the NASA IMERG algorithm, which combines observations from a fleet of satellites in the GPM or Global Precipitation Measurement mission constellation of satellites, and is calibrated with measurements from the GPM Core Observatory as well as rain gauge networks around the world. The measurements are done in near-real time, to provide global estimates of precipitation every 30 minutes.

Image: This false-colored infrared image taken from NASA’s Aqua satellite on Sept. 4 at 2:29 p.m. EDT (18:29 UTC) shows Dorian after it re-strengthened into a Category 3 hurricane off the Georgia and South Carolina coast. The image shows a clear eye in the storm. Intense storms capable of generating heavy rainfall appear in purple. Credit: NASA JPL/Heidar Thrastarson