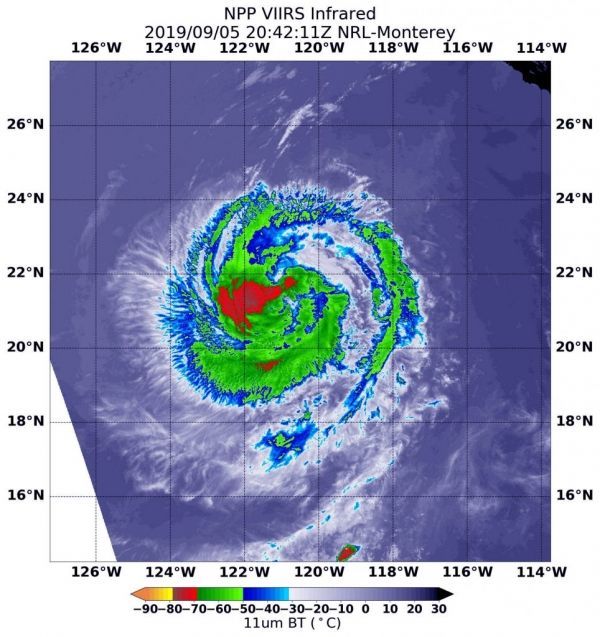 Hurricane Juliette has been weakening and NASA-NOAA’s Suomi NPP satellite provided a look at the strength of storms within.

Hurricane Juliette has been weakening and NASA-NOAA’s Suomi NPP satellite provided a look at the strength of storms within.

At 5:00 a.m. EDT (11:00 PM HST) on Sept. 6, the National Hurricane Center (NHC) projected that Hurricane Juliette would decline to a tropical storm sometime on Friday and NASA had satellites hovering overhead revealed the hurricane’s slow decline.

The NOAA-NASA Suomi NPP satellite passed over the decaying storm on Sept. 5 at 4:42 p.m. EDT (20:42 UTC) and observed the storm using the Visible Infrared Imaging Radiometer Suite (VIIRS) instrument. VIIRS showed the strongest storms were located in the western quadrant of Juliette. The National Hurricane Center noted 18 minutes later, “Deep convection associated with Juliette has decreased in coverage over the past 24 hours, however, the remaining convection still wraps completely around the center.”

Infrared imagery reveals cloud top temperatures, and the higher the cloud top, the colder it is, and the stronger the storm. Coldest cloud top temperatures were as cold as minus 70 degrees Fahrenheit (minus 56.6 Celsius) and found west of the center of circulation. Storms with cloud tops that cold have been found to generate heavy rainfall. Probably due to the fact that Juliette is decaying, the eye is not well-defined in this image and the strongest storms are no longer ringing the eye.

Image: NASA-NOAA’s Suomi NPP satellite passed over Hurricane Juliette in the eastern Pacific Ocean and the VIIRS instrument aboard captured an image of the storm on Sept. 6 at 4:42 p.m. EDT (20:42 UTC). Coldest (red) cloud top temperatures were as cold as minus 70 degrees Fahrenheit (minus 56.6 Celsius). CREDIT: NASA/NOAA/NRL