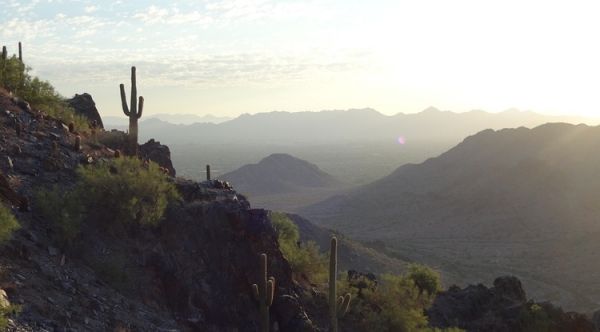 By studying nearly five decades of data on more than 5,800 saguaros dotting Tumamoc Hill, researchers found that small variations in the hill’s topography might buffer saguaro populations from the impacts of climate change.

The iconic saguaros on Tumamoc Hill served as harbingers in new research which sought to predict how the desert species will fare in the hotter, drier climate of the future and how topography might mitigate the effects of climate change.

Lead author Susana Rodríguez-Buriticá and her team crunched the numbers in a 48-year-long dataset that included information on more than 5,800 saguaros dotting the Desert Laboratory on Tumamoc Hill, an 860-acre ecological reserve owned and operated by the University of Arizona College of Science in partnership with Pima County. They found that small variations in the hill’s topography might buffer saguaro populations from the impacts of a harsher climate.

"This was an ambitious but highly valuable undertaking, since these plants can live for over 100 years," said co-author and United States Geological Survey research ecologist Daniel Winkler. "As a result of the long-term data set, we're able to identify how saguaro populations have been maintained over time and predict how they'll likely respond to future climate change."

Previous studies have attributed changes in saguaro populations to climate. This new study, published in the journal Ecosphere in August, confirmed more saguaro growth and establishment during wet periods, and alternatively, death and reduced establishment during drought and extreme freezes.