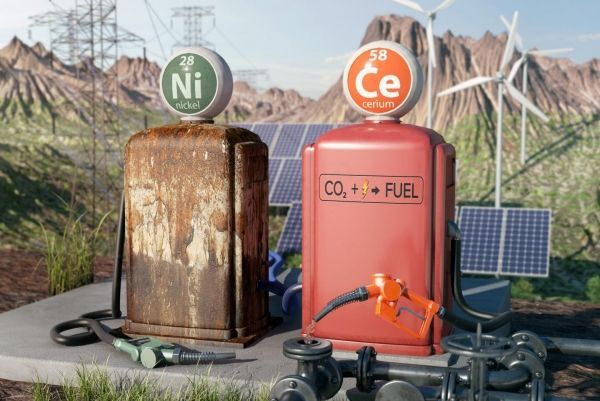 If the idea of flying on battery-powered commercial jets makes you nervous, you can relax a little.

If the idea of flying on battery-powered commercial jets makes you nervous, you can relax a little. Researchers have discovered a practical starting point for converting carbon dioxide into sustainable liquid fuels, including fuels for heavier modes of transportation that may prove very difficult to electrify, like airplanes, ships and freight trains.

Carbon-neutral re-use of CO2 has emerged as an alternative to burying the greenhouse gas underground. In a new study published today in Nature Energy, researchers from Stanford University and the Technical University of Denmark (DTU) show how electricity and an Earth-abundant catalyst can convert CO2 into energy-rich carbon monoxide (CO) better than conventional methods. The catalyst – cerium oxide – is much more resistant to breaking down. Stripping oxygen from CO2 to make CO gas is the first step in turning CO2 into nearly any liquid fuel and other products, like synthetic gas and plastics. The addition of hydrogen to CO can produce fuels like synthetic diesel and the equivalent of jet fuel. The team envisions using renewable power to make the CO and for subsequent conversions, which would result in carbon-neutral products.

“We showed we can use electricity to reduce CO2 into CO with 100 percent selectivity and without producing the undesired byproduct of solid carbon,” said William Chueh, an associate professor of materials science and engineering at Stanford, one of three senior authors of the paper.