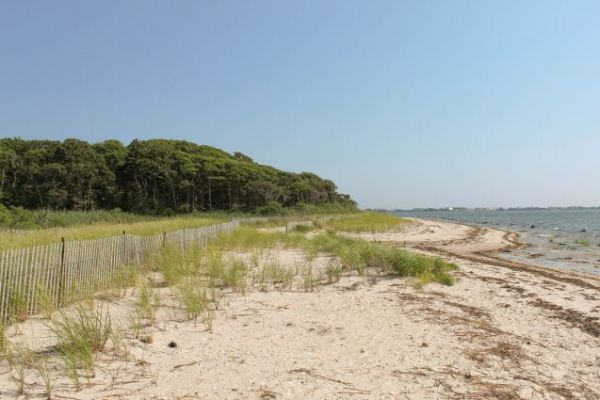 On a sunny Monday afternoon in August, the Shinnecock Indian Reservation’s beach in Long Island, New York, resembled one of the postcard-perfect beaches in the nearby Hamptons. Except, there weren’t any sunbathing tourists around. The coastline was quiet and serene with several inlets flowing into a nearby pond, surrounded by lush greenery and a thick forest. Amidst this sprawled a cemetery where tribal members have been buried for centuries. The only visible signs of human activity on the beach were ashes and dried flowers left behind on the soft sand from a recent wedding ceremony.

Post-Hurricane Sandy, this coastal area was far from being a source of pride or a place to celebrate for the members of the Shinnecock Indian Nation tribe. Sandy’s storm surge and destructive winds had left the shoreline completely barren and uneven. The pond had turned into a stagnant body of water for mosquito larvae to thrive in. Over the next two years, the stench from the hurricane-ravaged beach became unbearable. Even during daytime, locals were forced to avoid the beach because of the hordes of mosquitoes that would attack them.

As the seawater kept invading the Shinnecock tribe’s land, several trees in the forest by the shoreline started withering away. During high tide, the Native Americans lived with constant fear and anxiety that the Atlantic Ocean would swallow up their ancestors’ burial ground that was built right next to the beach.

“It was a stinky muck. Our tree line was fading away as the water levels were four to five feet deep into the outer edges of the forest long after Hurricane Sandy had subsided,” said Viola Cause, natural resource manager at the Shinnecock Nation Environmental Department. Even the town’s cedar trees, which are known to be tolerant of saltwater, had started dying.