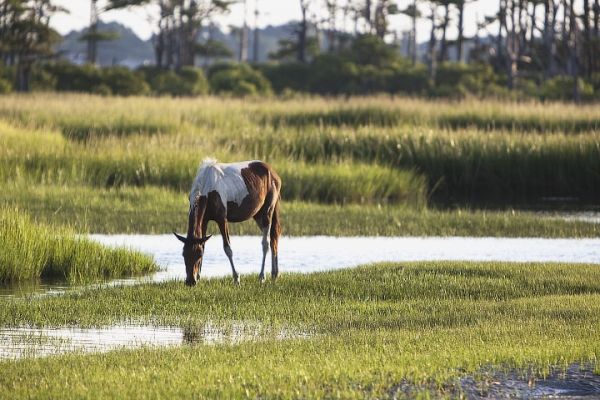 The surface of Earth is constantly changing and evolving. Coastal barrier islands demonstrate such change faster than almost any other landscape.

Assateague Island stretches 37 miles (60 kilometers) from north to south along the Atlantic coast of Maryland and Virginia. As barrier islands go, Assateague is quite dynamic. Longshore currents mostly flow south along this part of the coast, carrying sand to the south. So Assateague Island is steadily, relentlessly losing mass at its north end (near Ocean City, Maryland) and gaining it on the south end near Tom’s Cove.

Assateague also shelters two other islands, Chincoteague and Wallops, in a rare example of overlapping (duplexed) barrier islands. Major storms such as hurricanes and nor’easters sporadically and dramatically move sand from the ocean-facing side of Assateague to its land-facing side, into inlets and bays, and onto the shores of Chincoteague and Wallops. This means all three islands are slowly marching toward a merger with the mainland.

“This is how Assateague Island has been growing for approximately the past 2,000 years,” said Christopher Seminack, a University of North Georgia geologist who has studied the area. “The island is growing to the south as sand shoals are migrating and welding onto the island. You can see evidence of this from the linear features that appear to be welded onto the most southerly part. And because the southern spit of Assateague acts as a sediment sink—the sediment is deposited there—it starves the barrier islands to the south of sand.”