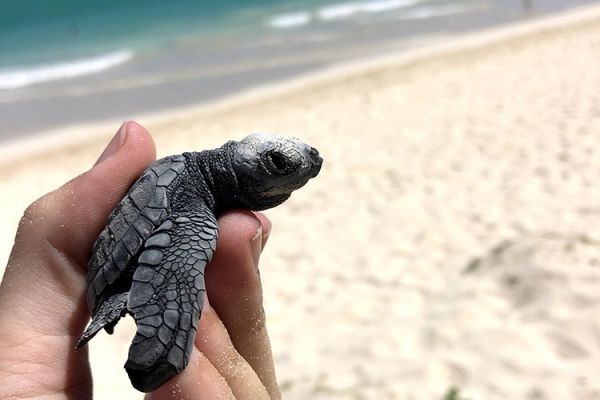 Imagine the surprise and excitement of finding a sea turtle nest hatching under your beach blanket during your island vacation.

Imagine the surprise and excitement of finding a sea turtle nest hatching under your beach blanket during your island vacation. Then to discover that nesting by that species is extremely rare across the entire archipelago!

Two visitors to Hawaiʻi, Ben Zitney and Sarah Wager, found just that—about 30 baby sea turtles emerging from a nest—directly under their towel! They quickly moved the towel and watched, fascinated, as the hatchlings scrambled over the beach and made their way to the ocean.

Zitney and Wagner were elated by their observations and curious to know about the species. Two species of sea turtle traditionally nest in Hawaiʻi: green sea turtles and hawksbill sea turtles. Green turtles are much more common, but neither typically nest on Oʻahu. More than 95 percent of all green turtle nesting occurs in the Northwestern Hawaiian Islands. Hawksbill turtle nesting occurs primarily on the islands of Hawaiʻi and Molokaʻi. Usually there are no more than 10 green turtle nests on Oʻahu per year.

Zitney and Wagner showed photos of the hatchlings to a local biologist, who noted the coloration was different from green turtles and suggested they might be hawksbills. They searched online for hawksbill turtles in Hawaiʻi and came across HIhawksbills.org. There, they shared their pictures with hawksbill turtle aficionado Cheryl King on Maui. King contacted members of NOAA’s Marine Turtle Biology and Assessment Program on Oʻahu. Zitney and Wagner’s quick reporting helped bring scientists together to solve this mystery.