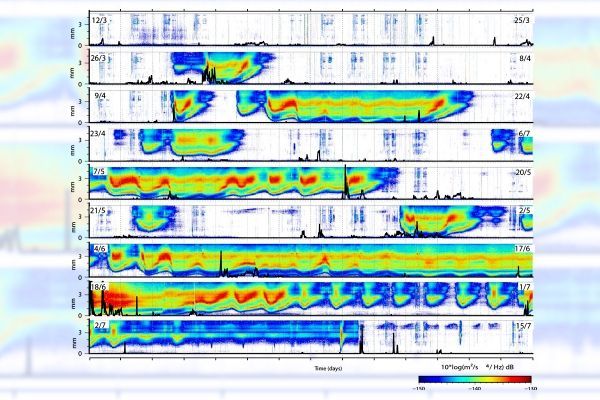 Researchers were able to identify days in which episodes of thawing occurred as well as the different degrees of intensity of these processes.

Researchers from the Jaume Almera Institute of Earth Sciences of the CSIC (ICTJA-CSIC) have analyzed the seismic signals generated by the increases in the flow of the Aragón River (Huesca) due to the melting of the snow accumulated in its upper basin. In a study recently published in the journal PLOS ONE , researchers describe how they have identified thaw episodes based on temporal patterns of variation in seismic data.

The authors of the study have used the data recorded over a period of 6 years (2011-2016) by the seismometer installed inside the Underground Laboratory of Canfranc (LSC), located about 400 meters from the Aragón riverbed, in the Pyrenees Aragonese.

From the signals recorded by the sensor, the researchers generated a series of daily spectrograms, a graphic way of representing the energy of the signal as a function of frequency with a resolution of minutes.

“During the thawing episodes we have been able to identify seismic signals with characteristic spectrograms that allow them to be differentiated from other sources of vibrations present at the bottom of the signal,” says Jordi Díaz , researcher at ICTJA-CSIC and first author of a study in which Mario Ruiz and Pilar Sánchez Sánchez-Pastor have also participated .