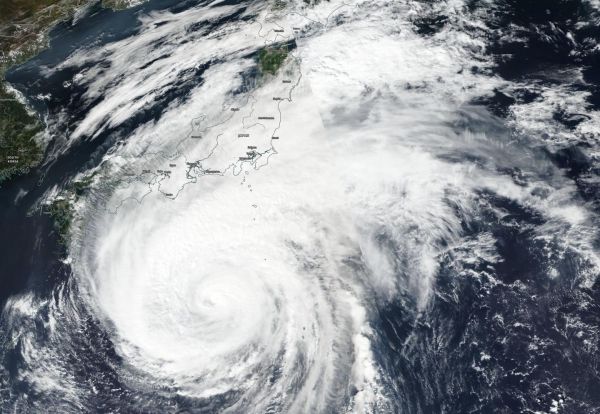 On Oct. 10, Hagibis was a super typhoon, but overnight, the storm weakened to typhoon status.

On Oct. 10, Hagibis was a super typhoon, but overnight, the storm weakened to typhoon status. NASA-NOAA’s Suomi NPP satellite provided a visible image of the large storm that stretched along most of the big islands of Japan.

Visible imagery from NASA satellites help forecasters understand if a storm is organizing or weakening, based on changes to its structure. The Visible Infrared Imaging Radiometer Suite (VIIRS) instrument aboard Suomi NPP provided a visible image of Hagibis that showed the eye had become cloud-filled. Despite that, A solid ring of deep convection (strong thunderstorm development) is evident around the compact, 10 nautical mile wide eye.

The image was created using NASA Worldview, the Earth Observing System Data and Information System (EOSDIS) data product at NASA’s Goddard Space Flight Center in Greenbelt, Md. The image showed the cloud-filled eye circled by powerful thunderstorms and a large tail of clouds streaming to the northeast of the center that stretched along much of Japan’s east coast.

At 5 a.m. EDT (0900 UTC), the Joint Typhoon Warning Center reported the center of Typhoon Hagibis was located near latitude 28.8 degrees north and longitude 137.5 degrees east. Hagibis is about 406 nautical miles south of Yokosuka, Japan. Hagibis was moving toward the north-northwest. Maximum sustained winds are near 132 mph (213 kph/115 knots) with higher gusts. It is the equivalent of a Category 3 hurricane on the Saffir-Simpson hurricane wind scale.

Image: NASA-NOAA's Suomi NPP satellite passed over Typhoon Hagibis and revealed the eye had become cloud-filled as the storm weakened from a super typhoon to a typhoon. The eye was surrounded by powerful thunderstorms and a large tail of clouds that covered most of Japan. (Credit: NASA Worldview, Earth Observing System Data and Information System (EOSDIS))